A visit with Dana Fredsti

Hotbuttonpress: Meet Dana Fredsti, author of The Peruvian Pigeon, the first almost-cozy mystery in her Murder For Hire series. Set in modern-day California, the book parodies 1940’s pulp detective fiction through the theatrics of a local acting troupe. They hire out their talents as fundraising entertainment for business and area high society, and along the way find a few dead bodies to complicate the plot. It’s clear the author knows her stuff when it comes to the acting world. Dana, how far back does your acting interest go? Elementary school? High school?

Dana: I would have to say my acting interests go back as far as elementary school, at least to the best of my recollection. My fifth and six grade teachers were very ambitious and put on Antigone and Hamlet, respectively, as the class plays. Oh yeah, and Julius Caesar. I played Antigone, Queen Gertrude and an extra in the crowd for Marc Anthony. The “we come to bury Caesar, not to praise him” speech. My cousin Sandy made my costumes and I loved my blue flowery pseudo-Grecian Antigone costume. I had really long hair back in those days and remember using my pony tail quite dramatically, flipping my hair this way and that as I gave my speech, before being dragged away to be entombed alive.

I also have very fond memories of the scene in Hamlet when Hamlet confronts his mother in her dressing room as Polonius hides behind a curtain to spy and is subsequently killed by the twitchy Prince of the Danes. When Polonius uttered his dying words, “Oh, I am slain!”, they came out as wooden as only an elementary student with no acting ability could deliver them. “Hamlet” and I looked at each other and got the giggles, which quickly spread to the audience and eliminated any possible drama in the rest of the scene.

I pretty much decided I liked acting from that point on. It was definitely my main interest in high school and the only class I didn’t want to ditch. Yes, I ditched classes occasionally to go get donuts at Winchell’s down on Clairemont Drive or to see dollar matinees at the Clairemont Theater with my friend, Maureen. The same Maureen who later became my partner in crime with Murder For Hire, by the way. At any rate, I was in every play except one during my three years of high school (our drama teacher, Mrs. Curran, believed every actor should work tech on at least one play), did community theater, and later went on to act in some really bad movies when I moved to Los Angeles. 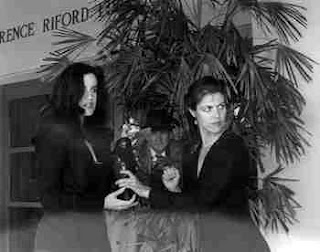 Hotbutton Press: So acting was really a career path for you?
Dana: Back when I was younger and more naive, I thought acting was going to be my career. I rapidly discovered I did not have the drive to put up with the bullsnit you have to go through even to start to make it. I have always been easily distracted. I’d go through phases of sending out headshots and resumes, went through a couple of agents without any real results, watched as the required dress size for an actress shrunk while her boobs grew disproportionately, and found I got more satisfaction from writing and eating what I wanted. I did come very close to getting a boob job, but didn’t follow through on it. It’s funny ‘cause when I first moved to Los Angeles, my size was considered normal for an actress. In a world where Brittany Spears was termed “obese” by some fans when she made her ill-advised wardrobe choice for the 2007 MTV Awards, I’d be Jabba the Hut. Okay, not that bad, but I was never a size 2 or 4. Except possibly when I was a toddler.
Hotbutton Press: What do you do now for a living? I mean besides write novels.
Dana: I’m currently working at a Venture Capital company (sustainable, green, health and wellness type investments) as their office goddess (i.e. manager). My co-worker recently told me writing was my real job and my day-job was my steady side-gig. Heh. I like the way she thinks. I actually really like the company, my co-workers and our office. All in all, it’s a great job and I’m very happy there. It’s like the anti-VC firm, with a really eclectic and creative group of people and they’ve all been extremely supportive of my writing. That, I’ve found through past experience, is a rarity in the workplace. Plus we have a really cool Nespresso maker and I make killer Belgian chocolate mochas every morning.
Hotbutton Press: Speaking of chocolate, your characters are seriously into it! Where can we find a recipe to tide us over until the next book?
Dana: This is an easy one! For the best hot chocolate ever, take two squares of Belgian chocolate and click here.
Hotbutton Press: I can see this mystery series adapted for TV. Would you ever consider that?
Dana: Oh, yeah! As long as it didn’t affect my writing more books in the series or any funky legal mess with the rights.
Hotbutton Press: What next?
Dana: Let’s see. I have both my sequel to MFH (working title Murder for Hire: The Big Snooze) and a supernatural thriller/romance/mystery started. That is to say, I’ve done basic plot and character notes, the barest skeleton of outlines, and some research for the latter. Also, another edit of a screenplay and I’ve made a solemn vow to post on my blog at least twice a week, preferably three! None of this is counting bookstore signings and other promotional appearances for MFH. 2008 will be a very busy year!
Hotbutton Press: Getting that sequel written for your impatient fans is the most important job. We’re dying to know what happens next, especially with the dangling romances you wickedly set up. I thoroughly enjoyed this book and have to say I didn’t suspect who the villain was right up until the conclusion. It was a definite cliffhanger for me. 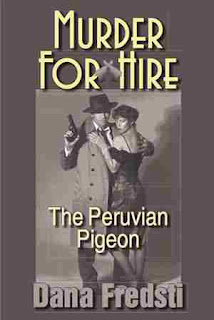 Don't miss out! There will be a drawing at the end of the tour for three free copies of The Peruvian Pigeon… but only if you leave a comment here or at the other blog book tour stops listed below:

And you can buy the book by clicking here. Enjoy the rest of the tour.
Posted by Dani at 5:51 AM

You're a very interesting person!

Great interview. I like the way to think about my side gig day job. Very good perspective.

A very interesting read about Dana Fredsti. I loved the ponytail swishing and the giggles during HAMLET. It brought back memories for me. The cover of Dana's book is so MIKE HAMMER. Very nice. I love it.

And now that I've crawled out from under a blanket of live felines (six this morning), taken my dog for a walk and eaten breakfast, thank you guys for the comments!

Nessa, I love my colleague's 'side gig day job' perspective. It actually created a huge shift in my attitude and perception about what I do. And it really helped.

Gwyn, I'd love to hear about your youthful drama experiences. That's the stuff that makes great memories later on down the road...

Heh, I can relate. I've always thought of my jobs as "day jobs."

So which book is next on your writing plate, the sequel or the urban fantasy? Or will you try and juggle both at once?

Dana, loved hearing about your (very) early days and how that has influenced what you do today. Combining those things we are passionate about is a rare and wonderful treat. (Listened to your reading of the prologue. Nicely done.)

Can't wait to read this first Murder for Hire book. Best of luck with the blog tour and sales.

RWAE, thank you so mch for your kind comment about the prologue. I'm dying to do a book on tape, if truth be told. I'm glad you enjoyed the interview - it was a blast to write. I haven't thought about some of those things in a long time...

OL, I'm gonna try and juggle the sequel to MFH and a supernatural thriller/romance. Urban fantasy is a good description too...anyway, my publisher said the latter is really commercial and easier to sell, but I also have to get the next MFH out there and be ready for series possibilities!

I wonder if it will ever get cold enough here for me to want Hot Chocolate? What are the chances that Dana's live book tour will bring her to Oahu?

Does she sound good? I can't get podcasts on my glacial landline. If you've got the voice for it, Dana, you really ought to think about books on tape!

Stephen, glad you're enjoying the podcast! It's nice to see Wombats here!

Elizabeth, I think of mySELF as almost cozy. heh...

Quilly..give me an excuse to come to Oahu! I'll bring my surfboard!

Dani, I am DYING to do a book on tape... I'm a total hambone and would totally get into it!

Dana, you have such an interesting way into writing -- and you just sparkle. Really enjoyed reading this.

Dana,
I picked you up over at Kat Campbell's blog and she sent me over here to get in on the start, and I'm glad I did. You talk like a down to earth "real people" type of girl and you make it easy to see both sides of the writing business. I'm looking forward to the rest of the tour.
rel

I enjoyed your interview and I'm looking forward to reading Murder for Hire. I love all kinds of mysteries and thrillers and I also love hot chocolate. I'm going to try your recipe.

What a fun interview, Dana, just like the book. I'm looking forward to the next entry in the Murder for Hire series and am itching to try that hot cocoa recipe!

Ann, thank you! I had a blast writing all the posts for this tour and I'm glad to know they're fun to read too!

Hi, Reminman, thanks for taking time to backtrack! I really appreciate it and so do my blog hosts!

Carol, if you're the Carol I THINK you are, I"ll make you the hot chocolate!

Zoggirl, same as for Carol. Come over and I'll make that hot chocolate! I have the Blaize Clement book for you too!

As much as I would like you to make the hot chocolate for me, it's unlikely that I'm the Carol that you think I am! lol I'm a reader from PA who is always looking for new authors to read!

Carol, I thought you were my mom! Her name is Carol too! :-) But if you ever get to SAn Francisco, the offer for hot chocolate is still there!

I just finished reading MFH: The Peruvian Pigeon and I have to say I just loved it! A fun read and a cracking good mystery too. It's wonderful to learn more about the author Dana -what a fascinating woman she is!

Why, thank you, Tattoo!

Connect With Me Here!

Thanks to Helen Ginger