It's a common misconception that people on Twitter will think you are spamming them if you tweet about your new book all day long. But let's look at how repeated messages play out.

I'm promoting my other blog, the Blood-Red Pencil, like crazy today because I'm hosting a blog book tour stop over there. I'm interviewing Jodi Carmichael about her first chapter book published by Little Pickle Press.

So to promote Spaghetti Is NOT a Finger Food, the book in question, makes my Twitter page look something like this: 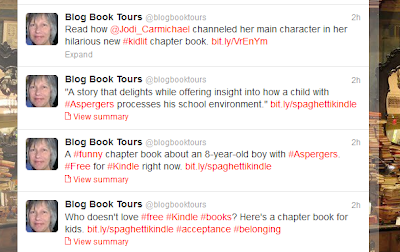 But it's important to remember that my posts won't run sequentially like this on YOUR Twitter page. They'll be interspersed in your Twitter stream among all the other folks you're following and who are tweeting, and the more you have, the less likely you'll see my tweets sequentially. In fact, if you have thousands of tweeps you're following, you may never see my tweets. So don't worry about looking like a spammer when you promote anything. Does that make sense?

Of course, I also like to mix it up by re-tweeting other unrelated information, adding some thoughts and quotes, just being a normal, sharing person along with promoting. The more value I add to my Twitter stream, the more people will like me.

Having said all that, keep in mind that Twitter doesn't like you to re-tweet the exact same thing more than once, so you do have to mix up your words a bit. That can be as simple as posting the same promotion, but with a different hashtag reaching out to various groups. You'll noticed I've used #kidlit as well as #Aspergers.

Tomorrow I'll talk a bit about HootSuite, which I use to queue up a bunch of posts to release on Twitter when I'm busy doing something else and can't tweet live. It's a handy tool.

And, yes, this re-tweet is absolutely true today:

Anonymous said...
This comment has been removed by a blog administrator.
11.1.13

Connect With Me Here!

Thanks to Helen Ginger